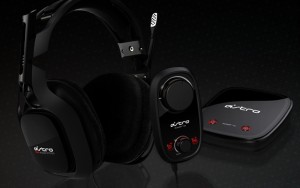 I recently tested a pair of Astro A40 wireless headphones which many consider the best Dolby Surround headphones out there for home theater use. These cost about $300 with the headphones, transmitter and receiver. The receiver only accepts an optical input and supports 2 channel PCM and Dolby Digital signals.

This system supports Dolby surround which means that it will give you the LFE and five surround channels when a 5.1 Dolby surround signal is input. This will simulate the effect of having a 5.1 surround system through headphones alone.

I compared these to about a $15,000 surround system in a dedicated theater with acoustic treatment and measured their performance with my Sencore SP495 and ACO Pacific audio analysis rig.

The headphones were reasonably comfortable, but I find a good set of ear buds to be much more comfortable. Ear buds are usable with the wireless system, but you will lose the LFE channel and the surround effect when using any two channel headphones.

The frequency response of this system was very flat from 20Hz to 500Hz. Unfortunately, they rolled off pretty heavily above 500Hz. Harmonic distortion was also very audible compared to a quality surround system. This was most notable above 1kHz where distortion was much higher than quality speakers can deliver. The SPL level these put out were also a little low compared to a reference surround system, but probably loud enough for most people. A good set of ear buds will out perform these in frequency response and distortion.

Movie sound through these does not have the same natural feel to it that a real surround system can. The dialog sounds like it is coming from the headphones instead of the screen. Surround effects were much weaker positionally than properly placed surround channels. The Dolby digital processing when activated adds more reverb to the sound than is appropriate creating an echo effect that is not in the recording. At higher sound levels a noticeable hiss can be heard in the background indicating the signal to noise ratio of the headphone amplifier is not very good. On the positive side the low frequency effects are very strong.

To summarize these headphones are a good way to listen to movies at loud levels without disturbing others and a low cost way to do surround sound for one person, but they are no substitute for a quality surround system.