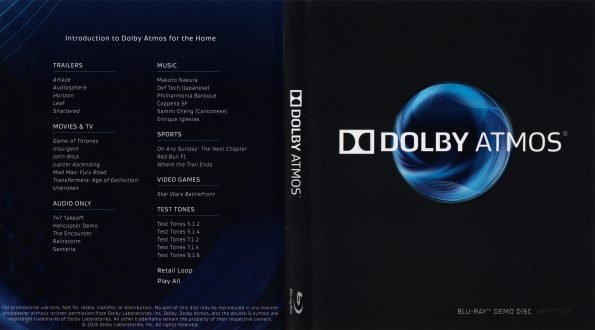 I get a lot of questions about what material I use to test audio. The following are things I use frequently to confirm a proper audio setup. These discs are not generally meant as some kind of torture test for your home theater. You should note a lot of music can be found in this list. I find music to be some of the easiest material to isolate setup and equipment problems if you are familiar with the sound.

Avia Guide To Home Theater (limited to 5 channels) – Channel Levels (band limited pink noise that requires an SPL meter to use well, you can try and balance the channels by ear with these tones)

Charlotte Gray DVD – There are several scenes in this movie that are useful for checking dialog intelligibility and timbre. These include the scene in the train with two people, the scene by the plant with three people, the scene where the woman pounds on the door and the scene where Charlotte Gray is being interviewed by a man. The character of the voices in these scenes is unique and can help pinpoint problems with dialog. This movie is a beautiful overall sound mix, but does not exercise the surrounds very much.

3:10 To Yuma Blu-Ray – The train entering the station near the end of the movie is a very nice strong bass effect that sounds realistic if you were near the train.

The Greatest Showman UHD Atmos – Impressive bass at the beginning of the movie when people are stomping in the stands.

Star Wars: Episode III – Revenge of the Sith DVD – The opening sequence with the battle star has very strong bass. When this is not present dynamic range compression may be active.

Dolby Atmos Blu-Ray Demo Disc (Sep 2015) – Amaze Trailer (good test at beginning for surround sound circling the room evenly). CAUTION the lightning strike in the last half of this disc can overload some subwoofers that are not properly filtered.

Appaloosa Blu-Ray – The gun shots in the bar gun fight near the beginning of the movie sound amazing on a well setup system.

Quantum Of Solace – The car chase scene in the opening sequence is like a theme park ride in theaters with the best dynamic range. It feels like you are in the car when things are working well.

Dave Matthews & Tim Reynolds: Live At Radio City Blu-Ray – This is an amazing recording of two people playing acoustic guitars. One of the best surround music recordings I have heard.

Chris Botti: Live with Orchestra and Special Guests Blu-Ray – A wide variety of instruments and vocals. One of the best surround music recordings I have heard.

The Greatest Showman UHD Atmos – The music sequence when Jenny Lind has her first performance in the USA is outstanding. The surround sound mix in the movie overall is great.

Pink Floyd Dark Side Of The Moon SACD – Time and Money (good tracks for checking audio clarity and timbre). Excellent surround music mix that should sound amazing on a well setup system.

An Acoustic Evening At The Vienna Opera House – The Balad Of John Henry (great guitar and drums). This whole album sounds great on well setup equipment.

One Night Only: Barbra Streisand and Quartet at the Village Vanguard – Gorgeous music mix throughout with a small band and piano. The audience clapping near the end sounds very realistic on the best systems.

The Duchess Blu-Ray – An overall beautiful and believable sound mix.

Sera una Noche CD – Eclectic audiophile recording of various instruments in a live venue. This album will demonstrate how close a system comes to a live performance.

Home Cinema Guru is literally one of the best Surround Sound communities around. I visit it everyday and I am grateful to have found surroundsoundreviewers.com. They helped me find a great system for my home and I really hope this helps others. Information is power LOL.

Great info here! It can be daunting when it comes to choosing the best home theatre products for your home. Once you’ve got it, you want to experience it to the fullest. Your list is great for all types of listeners!

Jeff is retiring in December 2020. If he hasn’t already calibrated your system, jump on it now before it’s too late.