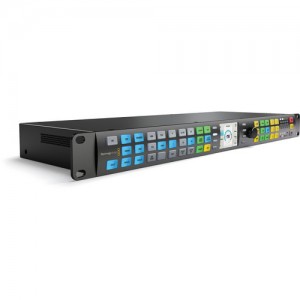 A system I worked on recently was using a Teranex 3D444 3D Processor to create 3D from 2D DVD and Blu-Ray sources. I have to say this product had the best results at this that I have ever seen. One report I heard about said that on comparison this is better than 70% of the 3D Blu-Rays when used with their 2D sources. That is not totally surprising because of Teranex’s history of high quality professional video processors that used to cost $250,000 and require government control because the processors were the same as those found in military applications. Teranex is also frequently specified for commercial TV applications. The big surprise is the price of this unit is less than $4,000. Blackmagic Design must have worked hard on reducing the cost of these units.

This unit does do more than just convert 2D to 3D. I suspect this unit is also great at scaling and converting formats, but I did not get to see those features in action. Because of it’s commercial nature it was not intended for consumer use. This creates some barriers to it’s use in a home theater. It does not support HDCP for HDMI and it appears to be quirky with HDMI handshaking. If you can deal with these and are a big fan of 3D you can definitely expand your 3D viewing to a wide variety of material that was never authored for 3D.

Just a followup to Jeff’s observations. After I performed a software upgrade to the Teranex, the HDMI handshake issue I was experiencing was completely eliminated.
This unit is incredible.

Hello
Any chance to have any help to do conversions from 2d to 3D with the teranex 3D? We bought the unit and my expectacions are low.
Thanks