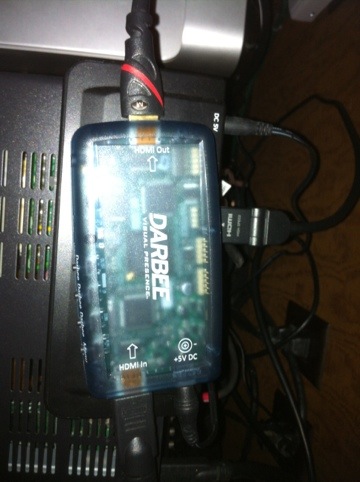 I recently had the opportunity to see the Darbee Darblet video processor. This is a next generation image enhancement product.

From what I saw it can be used in multiple ways. It can be set very strong where it will increase the inter image contrast or be used to enhance sharpness to varying degrees.

When used to slightly sharpen an image this device would be a great add-on for an LCD or LCOS projector to give you a look much closer to three or single chip DLP. At $269 this product can transform your JVC DILA into something closer to a three chip DLP without the extra light output. The sharpening algorithm when used lightly does not add ugly edges to objects like your normal sharpening logic. I also did not see artifacts from motion. Instead it appears to alter gamma slightly in the region of edges.

When this device is used more aggressively it will strongly enhance object contrast. This could be very useful for the visually impaired. It is also useful in enhancing low contrast images like some underwater photography.

It would be nice if there was an option to alter the sharpening in one percent steps instead of five. This would help
fine tune it for those attempting to slightly sharpen their LCD or LCOS projector. (update: they are now shipping units with one percent steps)

Update 8/7/2012: I recently purchased one of these with their latest firmware update. In my system it had problems switching from RGB to YCbCr turning the image false colors with my PS3. It also seemed to cause problems with my system automation. I returned it because it cannot be fixed without returning it to the manufacturer.

To: larry pace I don’t see much difference in the picture I have a Panasonic plasma HDTV ps3 vodka hdmi cables essence power cord for the HDTV an Audio quest power cord for the ps3 I hooked the darbee video unit to the ps3 to the HDTV the unit cuts out I sent it back to you at midday 5-8-2012. It is to bad 2 hdmi cables néeD to used my hdmi cables cost 369.00 each I think the unit should be in the blu-ray player or have one end with an hdmi cable built in on one end at nite the flashing light is annoying there should be a on off switch to stop the flashing .the case should have an alunimum casing with a Velcro tape kit to mount it .my power strip is an essence power disturbitor. With hospital grade plugins my wall plug has a special alloy to stop oxidation. My power cord has a copper plug it was processed -300 to give it the best sounding possible the power strip cord was done the same way.i found gold solder connections gives you the best possible video and sound.it makes all the difference .

Jason,
I sent you a replacement unit today, thanks for your patience. Estimated delivery date is 5/12. We thought a lot about the pros/cons of supplying the HDMI cable and with the wide range of price/quality we thought it best to leave that to the customer and our dealers, who already sell them. We are working on “getting built in,” and can only hope that our satisfied customers will make enough noise that the CE companies will have to roll it in. Thank you for the feedback about the product dress and kit, we discuss all those issue and your feedback will help make the product better. Let me know how the new unit works out for you.

Jason – this Darbee product has me interested, but your mention of it alongside $369 HDMI cables, special power outlets, and “the best sounding power cables” gives me pause.

An interesting sounding product nonetheless, and so far all the reviews seem pretty positive. The packaging is pretty ghetto for something $250 though – reminescent of a Gameshark.

If you have not seen the thread about the Darblet on the AVS Forum, you can read about it here.