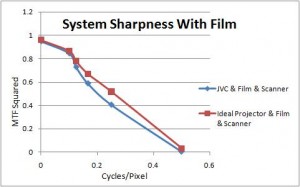 A high quality single chip DLP is as sharp a projector as we can buy. The big question is how much sharper is it than lets say a popular JVC DILA display. As with anything it depends on the system and the source material. If the source is camera generated the lens and imaging system filter the signal along with any film scanners that may be required. Digitally rendered material can be much sharper because it can avoid the sampling problems associated with digitally sampling an analog world.

Based on my experiments and others it appears that a single chip DLP is about 10 percent sharper with camera material (sports, film…). With animated material a single chip DLP can be 23 percent sharper. These estimates are based on MTF measurement comparisons between a JVC RS20 and a Samsung SP-A900B along with considering the effect of the film process. This difference in performance will be the case with reasonably bright scenes. As the scene luminance drops the 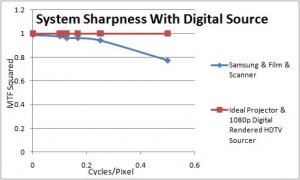 lower black level of the of the DLP will begin to effect the apparant sharpness. 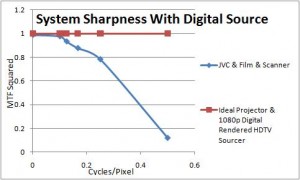 Always remember that image sharpness is only one compenent of picture quality. Great color and contrast are also very important factors in image reproduction. 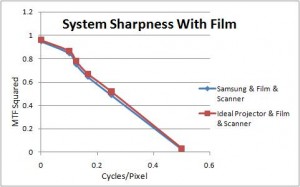