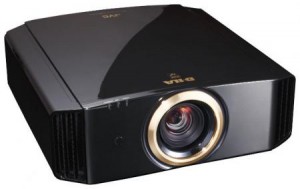 I have the opportunity through the course of my work to see many front projectors. Today the top product I have seen in the under $10k category is the JVC DLA-RS50. This projector is an evolutionary step in performance above the RS25 from last year. This unit adds 3D capability along with 3D image capability. When setup properly and used with a quality screen in a good room this unit is a significant improvement from last year. There are a significant number of new adjustments added to this product including custom screen presets and color gamuts. I found these not to be a reason to upgrade from last years JVC if you have one.

The biggest change in 2D performance is the motion handling and the reason to upgrade if you are not interested in 3D. In the past JVC units have handled film motion reasonably well while sports was much poorer than many of the other projectors on the market. This new projector reduces the gap in motion handling between the very best products and this one to very subtle levels. Color reproduction of these units is also improved over last years models with a quality calibration. I would not suggest upgrading for this reason though. The light output for 2D use is very similar to last years models. The ANSI and on/off contrast also appeared to be similar to last years models. Image sharpness also appeared to be the same as last years models.

3D is new to the JVC product line this year. This projector is the best under $10K 3D projector I have seen. To reproduce 3D well you need a screen that is bright enough to offset the light loss through the glasses. You must also not get the image too bright or the 48Hz frequency that the glasses operate on will be visible. This is a common problem with shutter glasses operating at 48hz for movies.