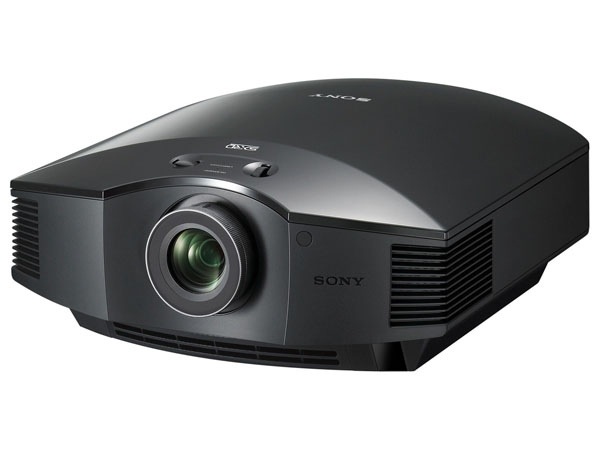 Last night I worked on a Sony VPL-HW50ES projector. This unit is a very compelling product. It had higher light output than any SXRD or DILA machine that I have seen except the VPL-VW1000ES. The color performance and motion handling were also very good after proper adjustment. The HW50ES is definitely an alternative to using a DLP projector or a gain screen to achieve 15 fL on larger screen sizes. It is not as sharp as a good single chip DLP projector, but does not have color breakup and has better native on/off contrast than most DLP units.

The light output from this unit was 1000 lumens in high lamp and 680 lumens in low lamp with 150 hours of operation on the lamp at D65 white point and a 1.6 throw ratio. The maximum light output of this unit is at least 300 lumens greater than other SXRD, DILA or LCD products of this class. This is very impressive for a product with only a 200 watt lamp. The tradeoff for this higher light output is what appeared to be lower on/off contrast and lower ANSI contrast than other current DILA and SXRD products. I found this to be a very reasonable exchange of performance parameters.

The client had installed picture settings from an Internet review of the product. These were nowhere near correct for color, resolution, edge enhancement and motion. The factory panel alignment was poor, but this could be corrected well in the user menu. Color management controls needed to be used rather heavily to correct for large color space errors that distorted color significantly across the spectrum.

3D performance of the product was pleasing after proper display calibration. There was a small amount of ghosting visible on menu text. The IR emitter built-in to the projector was not sufficient to work with the 3D glasses on a 110″ screen with no gain and the projector located near the top of the screen. An optional emitter was supplied by Sony at no cost to fix this problem.

The lens in this unit has a manual focus making it more difficult to achieve good focus than a quality motorized unit. The optical resolution of the HW50ES was lower than the more expensive Sony and JVC products. The optics were superior or equal to LCD units I have worked on in the past.

The built-in iris can be used to enhance the on/off contrast in auto mode or manually to temper the light output to theatrical levels when more light is available than necessary. Using the automatic iris will dim scenes inappropriately relative to brighter scenes. It will also darken brighter elements in dark scenes.

Motion handling in this unit was typical for a Sony SXRD. I find Sony SXRD products to have some of the best motion handling compared to other displays.

This unit is a great product at it’s $3,999 price point. The light output is truly exceptional. It was a pleasure to work on a 110″ 1.0 gain screen on low lamp and have more light than needed to meet 15 fL of light output unlike many home theaters I encounter. Color performance is also very good after proper calibration. Some people may be disappointed with how sharp this unit is compared to their flat panel displays. If you are looking for improved sharpness the VPL-VW95ES is better, but it is not as bright. A good DLP projector will be even sharper and some can be as bright as this projector.

Link to client review of my work on this product.