Achieving a D65 (x=0.3129, y=0.3290) white point is one of several key factors required to have a great image. One of the first things you may notice when a display is at D65 is the rich color and emotional ques that can be found in films. Directors tell a story in various ways including color, lighting, dialog and sound. When all of these elements are reproduced properly watching a film becomes a much more enjoyable experience. When white is the wrong color the whole image will be shifted in the direction of that color error causing the image to look wrong and that part of the story to be lost.

To check your display look at a test pattern like this that contains various levels of gray on a single image. The levels shown should be from near black to the maximum light level. When you are at D65 the near black should look charcoal black and the white should be a very clean looking white. If it has a tint to it you are not at D65. The best way to determine this is with a quality spectrophotometer like this. The final results will depend on the particular display, tools and skill employed.

I recently worked on a job that was previously calibrated by someone who had no idea what D65 looked like and instead blindly followed the instrument that was not correct. The resulting image was very purple in the darker areas and looked very poor. This one was so wrong it lowered image contrast by shifting the blacks to a purplish red. Even though this individual has been doing this for years he trusted his tool too much and spent two days trying to fix it to no avail because he had no idea what was going wrong. If the blacks do not look charcoal you are not at D65. Do not believe an instrument that tells you otherwise or you will end up with a poor picture. 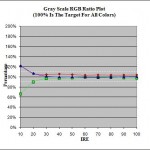 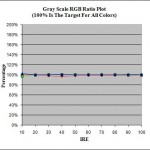